I visited the Pierre Bonnard: Painting Arcadia exhibit over the weekend, at the Legion of Honor in San Francisco. I have never heard of Bonnard nor seen any of his works before, but as of late anything French has been a keen interest. The second part of the exhibit, curated by Esther Bell features the artist’s intimisme, painted works which detail domestic interiors with an intimate subject matter. He depicted scenes at the breakfast table, women reading the newspaper awashed in morning light, tables laden with food. What Bonnard does is capture these moments tenderly, reminiscent of the way the writer Marcel Proust proposed a different way of looking in Alain de Botton’s How Marcel Proust Can Change Your Life.

The effect of these painted works on me was heightened, with Adam Gopnik’s book Paris to the Moon fresh on my mind. I got a used copy at the SF Big Book Sale in April, after seeing Alain de Botton’s (again) praise on the cover. I picked up it in a hurry without reading what it was about, and the book proved to be an exercise in good judgment.

Paris to the Moon details Gopnik’s move to Paris with his wife Martha and his son Luke from New York in 1995. He talks briefly about his childhood, blithely recounting the cardboard Parisian policeman he once had, family vacations in Europe to meeting Martha, who loved Paris as much as he did. I had to heave several sighs of wistful longing. After Luke was born, the family made its way to across the Atlantic to an apartment on the Left Bank street, second floor.

The odd thing in making a big move is the knowledge that your life will be composed of hundreds of small things that you will arrive at only by trial and error, and that for all the strikes and seminars you attend, the real flavor of life will be determined, shaped by these things.

My fascination with Paris, and France in general, started with literature (as do other things in my life). It wasn’t too long ago when I regarded France with a bat of the hand, scrunching up the side of my face after rolling my eyes and mouthing “colonizer.” But James Baldwin changed all of that.

When I read one of his books, Giovanni’s Room, I was glued to the characters of David and Giovanni’s lives in the tiny room that was ‘theirs.’  I started reading more about Baldwin after that, wanting to understand why France was ideal for him. When you hail from a Third World Country, it is usually the American Dream that permeates your ancestral and personal ideal. In an interview with The Paris Review, Baldwin states: It wasn’t so much a matter of choosing France—it was a matter of getting out of America.

Nevertheless, France became a refuge for the writer, while I joined the nameless group of writers who think of France as a sort of literary mecca. While I have never been to the country, I think Gopnik summarizes what draws the Francophile in:

It is not an old or antiquated Paris that we love, but the persistent, modern material Paris, carrying on in a time of postmodern immateriality, when everything seems about to dissolve into pixels. We love Paris not out of “nostalgia” but because we love the look of light on things, as opposed to the look of light from things, the world reduced to images radiating from screens. Paris was the site of the most beautiful commonplace civilization there has ever been: cafes, brasseries, parks, lemons on trays, dappled light on bourgeois boulevards, department stores with skylights, and windows like doors everywhere you look.

Both compositions by Bonnard above were commissioned by the critic George Besson, and in the paintings, the perspective of the viewer is as if s/he was seated in the brasserie. The Parisian brasserie is a focal point of Gopnik’s writing, with affinity to a specific one: The best places in Paris, like the Brasserie Balzar, on the rue de Écoles, don’t just feed you well; they make you happy in a way that other city’s restaurants can.

What gave Balzar its soul, according to Gopnik, are the ten serveurs, who have been working there for decades, their touch registering a filial sentiment that satiated emotionality. It was these serveurs like Thierry, whose name was initially omitted that ignited a group of patrons to defend the Balzar upon the announcement of an imminent sale.

Gopnik also took note of a particular incident at the Eiffel Tower where the French elevator operator clashed with a tourist, causing the operator to be fired. The tower employees then went on strike to show their solidarity. Labor strikes and protests in Paris, it turns out, are momentous occasions that could shut the city down. Gopnik experienced this firsthand, as he witnessed a closed Metro, no mail delivery, even a closed Paris Tourist office.

The serveurs, tower employees and the strikers all point to an obvious distinction: Most American draw their identities from the things they buy, while the French draw theirs from the jobs they do.

When the two ideals — of absolute professionalism unfettered by customers and of absolute tourism unaffected by locals — collide, trouble happens, pain is caused. Americans long for a closed society in which everything can be bought, where laborers are either hidden away or dressed up as no humans, so as not be disconcerting. This place is called Disney World. The French dream of a place where everyone can practice his metier in self-enclosed perfection, with the people to be served only on sufferance, as extras, to be knocked down the moment they act up. This place, come to think of it, is called Paris in July. 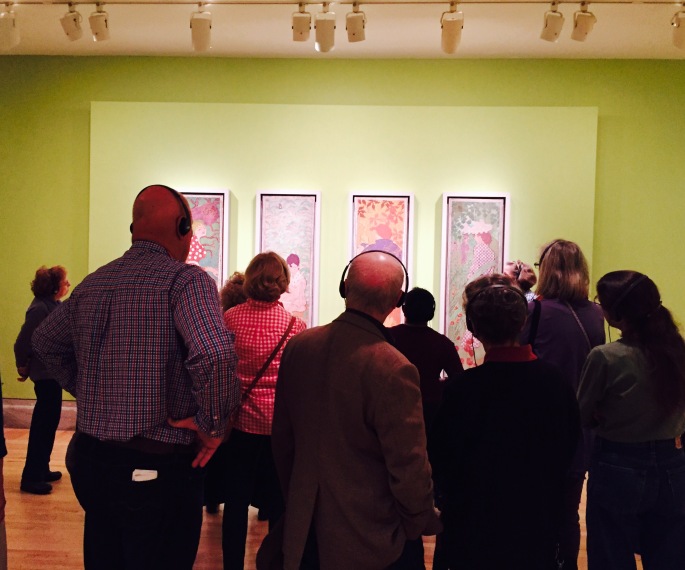 These wood blocks by Bonnard were reminiscent of his background as a member of the Les Nabis, a group of young artists who created works of symbolic and spiritual nature. These works were inspired by Japonisme, a genre influence by Japanese art, culture and aesthetic which also wove its way to Impressionism and Post-Impressionism art.

It took me a while to see the panels up close, as they were constantly surrounded, checked out, inspected by throngs of people at the exhibit. These works were created to”embody truths beyond the visible world,” as the group rejected traditional central perspectives, modifying Western laws of proportion and movement.

The colors and the forms of women on the wood blocks evoke playfulness and tenderness, of seemingly fleeting moments. They embody environments free of rigidity, the movement in the paintings superfluous. I found these sentiments in Gopnik’s writing as well, on his visits to the Luxembourg Gardens with Luke as he watched him ride the carousel, or when he and Luke would ride the bus down Saint-Dominique, pass by what he thought were fireflies, right across the Seine. Turns out, they were just lights strung on the trees, twinkling, captivating the naked eye. To him, in those moments, they were enough.

The hardest thing to convey is how lovely it all is, and how that loveliness seems all you need.

The painting above is of Bonnard and his longtime companion, Marthe de Meligny. She was featured in many of his paintings, mostly nude, while bathing. Although theirs was a complicated love story, their devotion to each other was resolute until Marthe’s death.

After their third Christmas in Paris, the Gopniks discovered that they were about to have an addition to the family. In perhaps the most tender that I’ve ever read in his essay collection, Gopnik wrote about Martha and their relationship lovingly: Martha and I had always been close, but now we were so near and it is different.

After their third Christmas in Paris, the Gopniks discovered that they were about to have an addition to the family. What followed were accounts of what Americans should really emulate from the French; from the language, prenatal care to the culture of motherhood, the French, for a lack of better word, got it together.

In New York, in other words, pregnancy is a medical condition that, after proper care by people in white coats and a brief hospital stay, can have a “positive outcome.” In Paris it is something that has happened because of sex, which, with help and counsel, can end with your being set free to go out and have more sex. In New York pregnancy is a ward in the house of medicine; in Paris it is a chapter in a sentimental education, a strange consequence of the pleasures of the body.

Bonnard passed in 1947, near Le Cannet on the French Riviera. His last painting, The Almond Tree in Bloom, was completed a week before his death.

It’s strange to discover within me, a well of saudade, but I am warmed by having been a witness to the beauty and depth of Bonnard’s body of work, and Gopnik’s intimate portrayal of the Parisian life. I hope to see France soon.

Pierre Bonnard: Painting Arcadia exhibit which runs until May 15, 2016