Oakland, early Sunday evening. A sense of calm is rare while driving on the Bay Bridge, but it was there as I made my way from San Francisco to the other side. Comrades from the Philippines were giving a report back on their recent trip to the motherland and I thought about the ever present thread of home between two places: Oakland, Philippines.

On a table in the space were goods for sale from home — woven wallets, tote bags, shirts and a pile of books. I came upon the books and recognized her face instantly. Bai Bibiyaon Likayan Bigkay. A flood of thoughts, a rush to the heart. I’ve seen this face countless times, as she continues to speak out against the injustices the Lumád people have been experiencing.

Lumád is a collective term for non-Islamized indigenous groups in Mindanao. It hails from a term meaning “native” or “indigenous” and was accepted by about 15 Mindanao ethnic groups to differentiate themselves from Moros, Christians and other Mindanao settlers.

I came home with copies of BAYI: Stories of Lumád Women that night. For the next few days, I learned about the stories of fierce Lumád women and their struggle to fight for their land, liberation and people.

Here are the stories and struggles of three Lumád women: 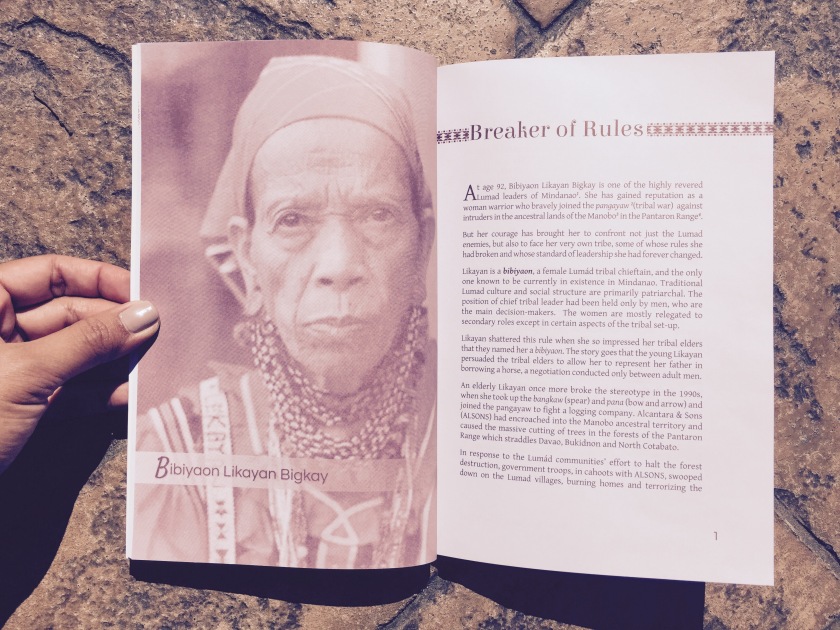 At 92 years old, Bai Bibiyaon Likayan Bigkay‘s strength and courage has been a constant source of inspiration for many. She is a bibiyaon, a female Lumád tribal chieftain in a culture that is traditionally patriarchal. In the 90’s, she joined a tribal war to fight the logging company Alcantara & Sons (ALSONS).

The Pantaron Mountain Range, a mountain range that runs across several provinces in Mindanao, is home to tribal communities and has been sought after by transnational companies for its resources-rich landscape.

Instead of defending the Lumád, the government has been aggressive in pushing tribal communities out to give way to profit-seeking entities. With aggressive military and paramilitary operations, Likayan and her community have been forced to evacuate and seek encampment in other areas.

Still, her resilience and commitment to justice remains strong. 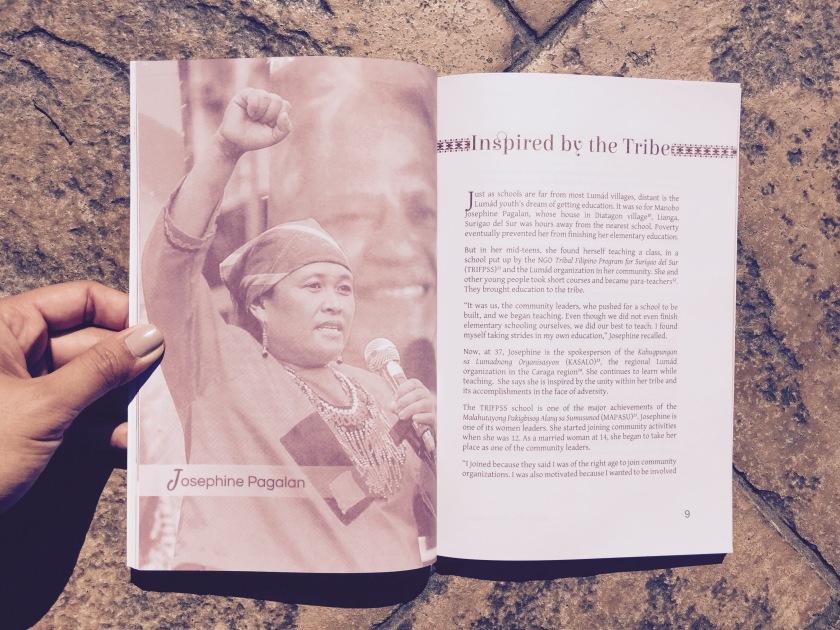 Josephine Pagalan is the spokesperson of Kahugpungan sa Lumadnong Organisasyon (KASALO) and since her youth, she has been an active member of her community. In spite of not finishing her elementary education, she was able to bring education to their tribe.

As a Manobo of Surigao del Sur, she has been able to teach and struggle with her community against patriarchal and backward traditions. With her leadership, she has inspired community leaders to stop practicing discriminatory practices.

In 2015, Josephine witnessed the shooting of Dionel Campos, a tribal chief, by a paramilitary group. The Lumád have faced harassment and threats from the military, with instances of extrajudicial killings and enforced disappearances.

One of the things that constantly motivates and challenges me to continue in the struggle is the continuous harassment that Lumád communities face. The continuing human rights violations have motivated me to act to change the situation. 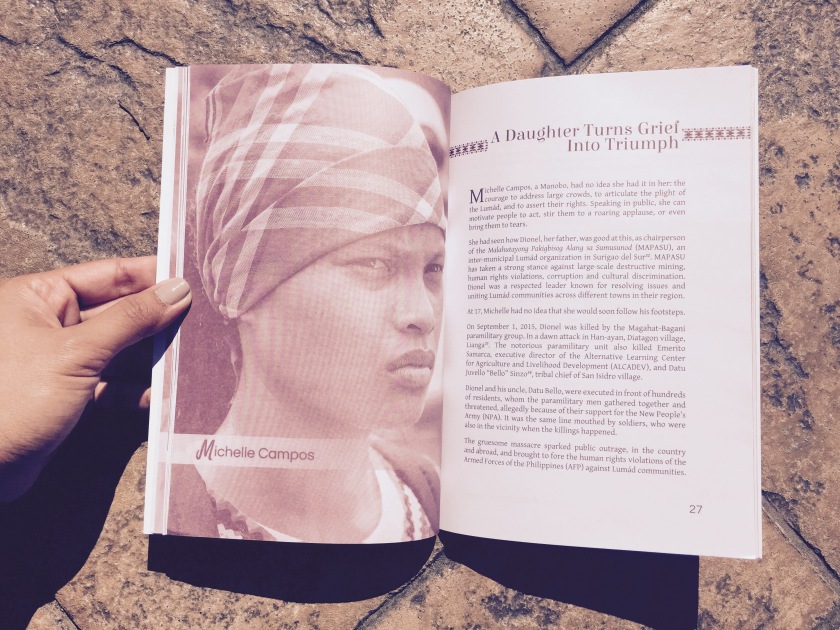 Dionel and his uncle, Datu Bello, were executed in front of hundreds of residents, whom the paramilitary men gathered together and threatened, allegedly because of their support for the New People’s Army (NPA). It was the same line mouthed by soldiers, who were also in the vicinity when the killings happened.

Michelle Campos is the daughter of slain tribal leader Dionel Campos. She was just 17 years old away when she became the spokesperson of the campaign #StopLumadKillings, as the Lumád’s struggle for land, justice and self-determination garnered national and international media attention.

Michelle herself experienced having to leave her home after being repeatedly forced out by the military. She learned about culpability of the government in her community’s displacement and hardships through the Tribal Filipino Program for Surigao del Sur (TRIFPSS), which is an NGO supported by religious groups. Both TRIFPPS and ALCADEV “carry a patriotic, pro-people and scientific curriculum based on agriculture and the Lumád indigenous culture.”

In spite of constant harassment by the military and paramilitary groups, in spite of the government’s lack of accountability and support to their communities, Michelle was witness to the power of collective action by the Lumád: the ability to build schools, organize cooperatives, develop their livelihoods, protect their communities, assert their rights.

They need to know, those in the cities and around the country that we are the Lumád and that we are people and we have rights. We are not possessions to be owned, we are not animals. We are humans who share this world. We want others to know about us, especially after what happened to the three people loved by the community who were killed by the paramilitary. The tragedy instead of paralyzing us has strengthened our resolve and with them in mind, we continue the struggle.

6 thoughts on “Lumád Women You Need to Know”