His face between my hands, wet as a cut.
If we make it to shore, he says, I will name our son after this water.
I will learn to love a monster. He smiles.
— “Immigrant Haibun” 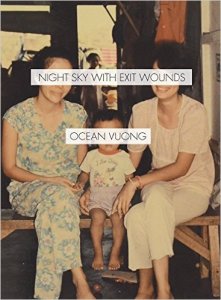 To be named after vast waters is an immense weight, but Ocean Vuong’s poetry in Night Sky with Exit Wounds ripples, sends waves across the body, across time.

Living at a time when queer contemporary poets are publishing their work has been life-giving. Over the past years, the work of Saeed Jones, r. erika doyle and Danez Smith have suffused harsh nights with tenderness, long days with joy.

Ocean’s poetry reminds me of Warsan Shire’s in Teaching My Mother How to Give Birth where the self is in constant rhythm with flight — of leaving and arriving, of reliving and remembering. Both poets grappled the afflictions of war throughout their writing — from Vietnam, Somalia.

In Night Sky with Exit Wounds, Ocean carries the stories of his parents seeking refuge away from Hanoi. His father is a constant subject, navigating political and emotional terrains. I remember reading “Telemachus” with a profound longing to reach through time and understand the visceral loss of a son, entwined with his father.

Like any good son, I pull my father out
of the water, drag him by his hair

through white sand, his knuckles carving a trail
the waves rush in to erase. Because the city

beyond the shore is no longer
where we left it. Because the bombed

cathedral is now a cathedral
of trees. I kneel beside him to see how far

I might sink. Do you know who I am,
Ba? But the answer never comes. The answer

is the bullet hole in his back, brimming
with seawater. He is so still I think

he could be anyone’s father, found
the way a green bottle might appear

at a boy’s feet containing a year
he has never touched. I touch

his ears. No use. I turn him
over. To face it. The cathedral

in his sea-black eyes. The face
not mine — but one I will wear

to kiss all my lovers good-night:
the way I seal my father’s lips

with my own & begin
the faithful work of drowning.

A few months ago, I read and wrote a book review of Viet Thanh Nguyen’s The Sympathizer. What little I knew of the Vietnam War expanded as I dove deep in the sometimes hysterical, sometimes maniacal narrative of Viet’s main character, a half-French half-Vietnamese sleeper spy. While genres, voice and format differ, the Vietnam War left a significant imprint on everyone and everything it touched.

He reveals the semiotics of memory, the traces of war on the body. (To transcribe the poem in the blog would not suffice, here’s “In Newport I Watch My Father Lay His Cheek to a Beached Dolphin’s Wet Back” straight from the book:)

His poems are brimming with elegiac elegance, the kind that makes you want to know more but you stop short of asking, almost fearful of the answer(s). I think about the father in different ways as if he was my own. I can almost see his face in the pages — his whiskey-lips, his knees sunk in ink-black mud.

In “The Gift,” a poem wherein he teaches his mother the alphabet, I remember my own. The question, a delicate point: how to teach someone who’s taught you your whole life?

She doesn’t know what comes after.
So we begin again:

But I can see the fourth letter:
a strand of black hair — unraveled
from the alphabet
& written
on her cheek.

I’ve only touched on a few of Ocean’s poems but the whole collection is worth a read. As poet Li-Young Lee states: What a treasure [Ocean Vuong] is to us. What a perfume he’s crushed and rendered of his heart and soul. What a gift this book is.

5 thoughts on “The Inevitability of Ocean Vuong’s Poetry”