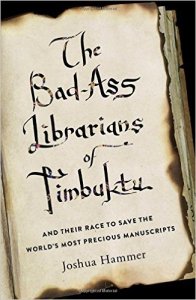 I’m going to be honest: I was initially drawn to this book because of the title. Joshua Hammer’s The Bad-Ass Librarians of Timbuktu had me at “bad-ass librarians” and from the first page to the last, I was thrust in a world of unearthed manuscripts dating back to the 1500s, Al Qaeda commanders and a certain Abdel Kader Haidara who dedicated his life to preserving the written word.

I empathized with Haidara, fast. I thought about my modest collection of books, as opposed to life-threatening feats that he often endured to acquire and preserve original texts. Not knowing when I could make a trip to the bookstore or fearing being stranded somewhere or having to wait for a long time without a book suddenly seemed frivolous. Haidara’s pursuits across the Sahara desert and along the Niger River to find manuscripts as he growing up, and then having to run a smuggling operation to save them from Al Qaeda in recent years were no small feats.

I never really thought about the history of the written word but Haidara’s story prompted me to dig a little deeper. A Google search reveals that the first book ever made was the Epic of Gilgamesh prior to the eighteenth century B.C. in Sumer, the southernmost point of Mesopotamia (modern-day Iraq and Kuwait) which was an epic poem engraved on clay tablets. This made immediate sense to me. It wasn’t surprising then that literature was already rampant in areas of the Middle East and in Africa, contrary to Eurocentric history. 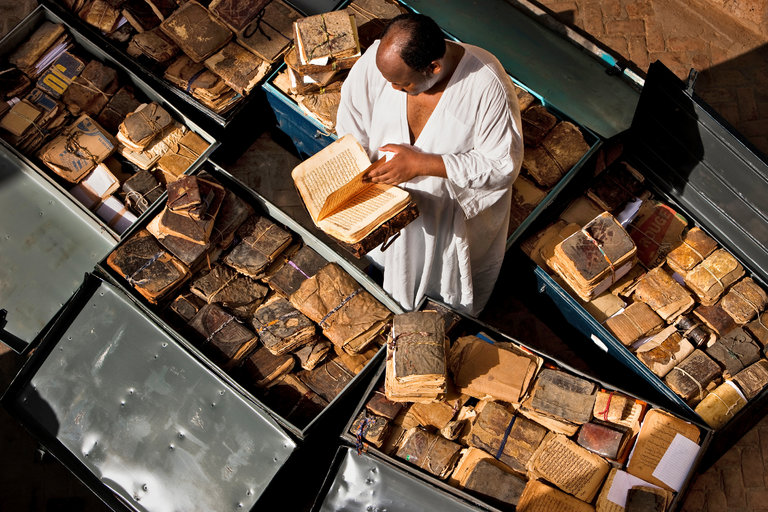 The book begins with a young Haidara’s search for manuscripts throughout the Sahara desert and along the Niger River, sometimes going on week-long journeys. Hired by the Ahmed Baba Institute in Timbuktu, he would visit the homes of people known to keep manuscripts and traded them with money, livestock or anything that he can barter with. In about a year, he was able to recover some thousand manuscripts and placed them at the institute.

I’ve barely heard of Timbuktu — probably in cartoons I’ve watched as a kid — a magical, exotic place but other than that, I had nary an idea on its geographical nor political significance. But to understand Haidara is to also understand the capital of Mali.

People hid manuscripts all over Mali. They placed them inside leather bags and buried them in holes in their courtyards and grades, stashed them in abandoned caves in the desert, and sealed the doors of their libraries with mud to hide the treasures inside. Under the new colonial rulers, French became the primary language taught in Mali’s schools. As a result, several generations in Timbuktu and other towns in the region grew up without learning to speak Arabic, which doomed the works to irrelevance.

Centuries in the making, Timbuktu was once the center of scholarship as scientists, historians, philosophers and verse makers flocked to the city. Writers like Ibn Batuta, “the greatest traveler of the medieval world” and Hassan Mohammed Al Wazzan Al Zayati whose pen name was Leo Africanus wrote about a vibrant culture of manuscript writing and book collecting in the city.

To know this is important:

European historians and philosophers had contended that black Africans were illiterates with no history, but Timbuktu’s manuscripts proved the opposite — that a sophisticated, freethinking society had thrived south of the Sahara at a time when much of Europe was still mired in the Middle Ages. 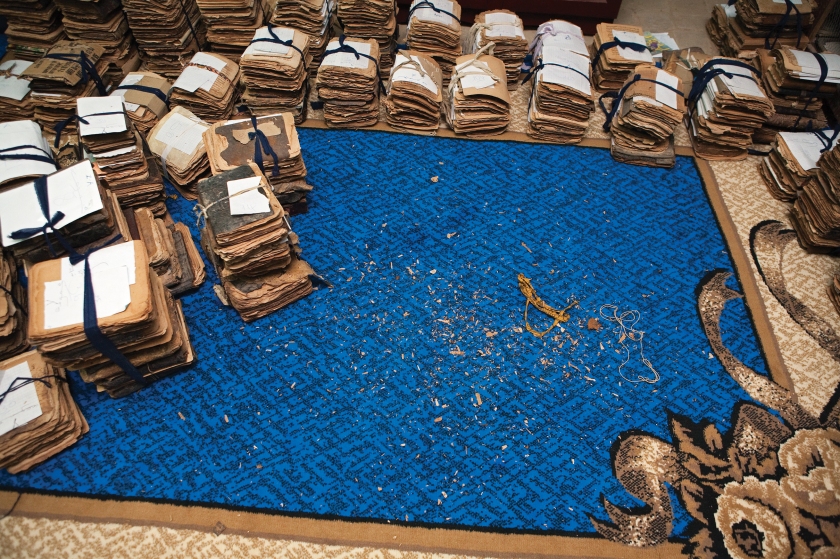 What I didn’t expect from Hammer’s book is an account of the Al Qaeda of the Islamic Maghreb’s (AQIM) history, formation and activities throughout the region — from recruiting to training to kidnapping. I usually avoid books that portray folks from the Middle East/North Africa in this manner because I’m aware of implications fabricated by the West.

Most of the time, “jihadis” are trained by CIA to overthrow current regimes or to fight off rebels in the country. We’ve seen this happen with the rise of so many “terrorist groups” currently, like Al Qaeda and ISIL. The fact that the United States has a long and torrid history of backing terrorist groups will surprise only those who watch the news and ignore history.

Hammer delved into the crisis spreading throughout Mali, as AQIM occupied and imposed strict Shariah law in the region. My knowledge about the Middle East has been mostly through anti-imperialist rhetoric, with the work of writers like Joseph Kinzer, Howard Zinn, John Perkins. I’ve always consumed literature that exposed the hypocrisy of American exceptionalism but this book had me thinking. There is another layer reinforced by the manipulation of the West.

Muhammad Abd Al Wahhab, an eighteenth-century preacher from the desert interior of what is now Saudi Arabia, had urged a return to the austere Islamic society created by the Prophet following the Hejira, his migration to Medina from Mecca in 622 CE.

Al Wahhab’s followers rejected modernism and secularism, supported the imposition of Shariah, called for a restricted role for women, and aspired to create an Islamic caliphate modeled after the seventh-century religious state ruled by the Prophet and his successors. 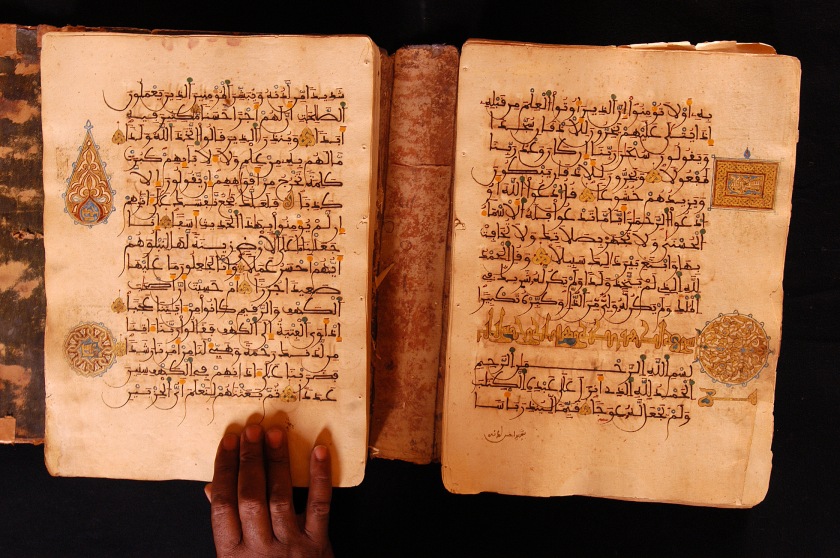 Initially resistant to moving the manuscripts and fearing only termites (who could eat away at the centuries-old scrolls), it suddenly dawned on Haidara to do something as one thought crossed his mind: They’re going to break into our libraries, and steal everything inside, and destroy the manuscripts. What do we have to do to save them?

What followed was a journey of epic proportions, a smuggling operation across the country. Along with Emily Brady, a scholar from Washington State and Mohammed Touré, Haidara’s nephew, the group was able to move manuscripts from the occupied city to homes of trusted people.

Transporting hundreds of thousands of priceless and fragile artifacts over 606 miles of unpredictable terrain would, they understood, be dangerous and hugely expensive. They would need to hire couriers and drivers and rent hundreds of trucks, four-wheel-drive vehicles, and taxis. They would require cash for bribes, spare parts, repairs and gasoline. Brady calculated a budget of $700,000 and she and Haidara reached out to their contacts around the world.

After weeks of traveling, bribing, being stopped and detained — thirty round-trips between Timbuktu and Bamako — 277,000 out of the 377,000 manuscripts made it to their respective safe houses. Not one was lost, not one was destroyed.

Haidara’s nephew, Touré, is the real hero here, the most bad-ass librarian there is. He traveled with the chests of manuscripts himself, braving roadblocks, checkpoints and the uncertainty of the country’s terrain under AQIM.

With intense dedication (and some international support), the team was able to save these manuscripts from destruction. I held my breath throughout the whole ordeal, as if I was watching a movie unfold before my eyes. I was with Haidar and Touré and the need to save these relics, significant parts of Malian history that paints a different picture from the throes of Western history.

Georg Wilhelm Friedrich Hegel in the 1837 Philosophy of History, argued that Africa had no indigenous system of writing, no historical memory, and no civilization. “It is no historical part of the World; it has no movement or development to exhibit,” he declared. “What we properly understand by Africa is the Unhistorical, Undeveloped Spirit.” The arguments of these Enlightenment philosophers had frequently been cited as a justification for the slave trade. 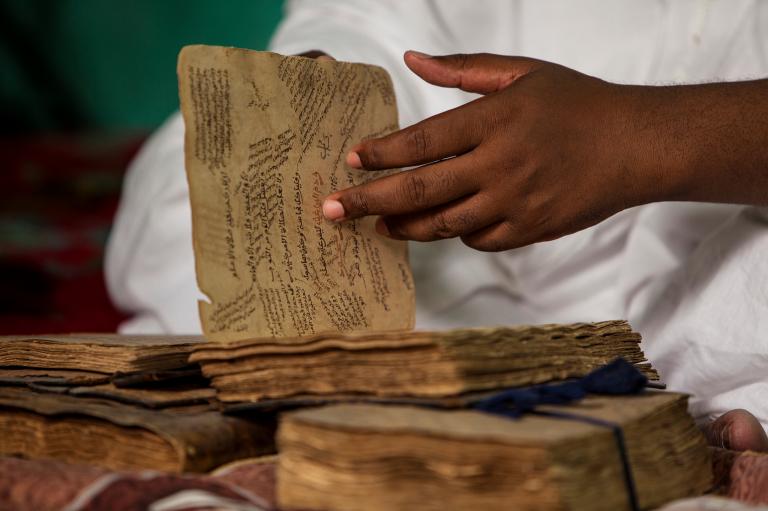 All of these manuscripts just proved Hegel wrong, many of today’s preconceived notions of Islam. In spite of extremists ruling mainstream airwaves, there are people like Haidara intent on preserving what he’s known all along.

“The manuscripts show that Islam is a religion of tolerance,” said Haidara. “We need to show the West the truth.”

One thought on “Bad-Ass Librarians from Timbuktu: Haidara & Touré”