“I pledged to ISIS in January 2015 and left in March,” said Raad Abdullah Ahmad, 31. “My family disowned me after that. Imagine having no family. I left because I didn’t like what they did to people.”

When I read the lines above in a NYT article, my thoughts immediately went to Parvaiz Pasha, a fictional character in Kamila Shamsie’s book Home Fire: A Novel (Amazon | Indiebound) which was long-listed for the Man Book Prize for fiction.

Since I migrated to the U.S. in 2004, the political reality of the country has always stayed the same: at open war. Afghanistan, Iraq, Pakistan, Syria. Taliban, Al Qaeda, ISIS. That has translated to war against Muslims, officially ordained as “terrorists” by the West.

My coming-of-age story is marked by this reality, a young Filipino immigrant slowly understanding the social pathology of violence, of the industrial military complex, of the other-ing of militants who essentially wanted the same thing the U.S. did.

In Home Fire, I was able to get a glimpse of the story behind Parvaiz’s decision, a British Pakistani who was recruited to a militant group on accounts of being the son of a famed jihadi warrior. Shamsie takes her readers beneath the layer of what we see on our TV screens, or what politicians have chosen as their generic anti-terrorism mouth pieces.

Parvaiz’s dad brought shame to their family, after joining a militant group himself. His involvement was immediately frowned upon, he was disowned. As a child, the boy took great pains to conceal his father’s identity, and it was only when he met another elder, a father figure who intentionally tried to recruit Parvaiz did he realize what his father’s work meant to other people.

These responsibilities were what estranged the father from Parvaiz’s twin sister Aneeka and older sister Isma. The legacy of their father loomed in the household, a cause of great shame to both women. The story centers on these three characters, as Shamsie skillfully adopts and mimics their struggle as a Greek tragedy. She hones in on their relationship, illustrating the ebb and flow of simultaneous allegiance and estrangement.

The father-son dynamic takes another form with two more characters, a British Muslim politician and his son who gets tangled up with the twin sister. Karamat Lone once shared a photo with the twin’s father, as if mocking the political distance between them. Whereas one harbored a nationalist fervor that ultimately ended his life, the other believed in adopting “enlightened” Western ways.

Home Fire tells the social, political and moral story of our time, a conflict that has long been drawn between the East and the West. While I wish I can review a book as objectively as I should, I can’t take off my own lens and perspective and where I stand in the face of creating history. There are complications and contradictions.

While I can read the Shamsie’s book and put it away on my shelf when I’m done, the fact is I am living and breathing in a country whose ideals have trampled on the rights, lives and dreams of others.

I am no political scientist, no expert on this field. But to some extent, I know that the word terrorism is subjective and is dependent on who is looking. What I am though, is a student of history, a fervent lover of the written word, perpetually curious about/alarmed by the world. 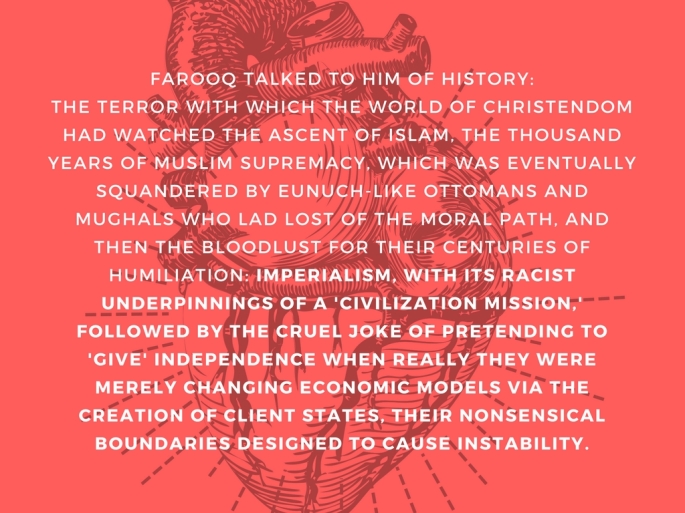 From one generation to the next, the blood lust as the quote above inscribes has long been a drive for power, control and legacy, even shame, no matter what it takes.

One thought on “The Legacy of Shame, with Kamila Shamsie (A Book Review of ‘Home Fire’)”