As I write this, Trump’s visit to Southeast Asia is underway. The 12-day tour in Japan, South Korea, China, Vietnam and the Philippines reflects the increasing importance of the region tied to American interests, in aspects of geopolitics and economics.

South Korea is his second stop, and I think about the increasing provocation from his administration and North Korea’s regarding nuclear weapons. This has been the most dominant issue in the news cycle. Many cower in fear, but many more are calling for anti-militarization, specifically from a country with the largest military budget in the world.

This was the context as I read Min Jin Lee’s Pachinko (Amazon | Indiebound), a multi-generational saga of a Korean family in the early 1900s. From the shores of Yeongdo beside the port city of Busan comes Sunja, the daughter of a poor couple who has thrived in spite of living under imperial Japan’s tutelage.

Lee’s book tells Sunja’s story from her birth throughout her life, as she moved from Korea to Japan. After becoming pregnant with a man who turned out to be married, Sunja’s life turned upside down. Her pregnancy was sure to bring shame to her family, until a sickly minister, Isak, volunteers to take her as his wife and bring her to Osaka.

It is in Osaka where most of the book takes place, as Sunja and her newfound family (Isak’s brother Yoseb and his wife, Kyung-hee) face the rest of their lives head on. Two more generations follow, with Sunja’s sons and their respective children, as they try to survive in a country that either ignores or loathes Koreans.

Throughout the entire story, the women suffer the most — from carrying the burden of shame with Sunja’s unwanted pregnancy, to being the kind of wives their husbands expected them to (such as Kyung-hee’s predicament), to the indelible and incredible task of mothering.

Even at a young age, this was what her mother taught Sunja. 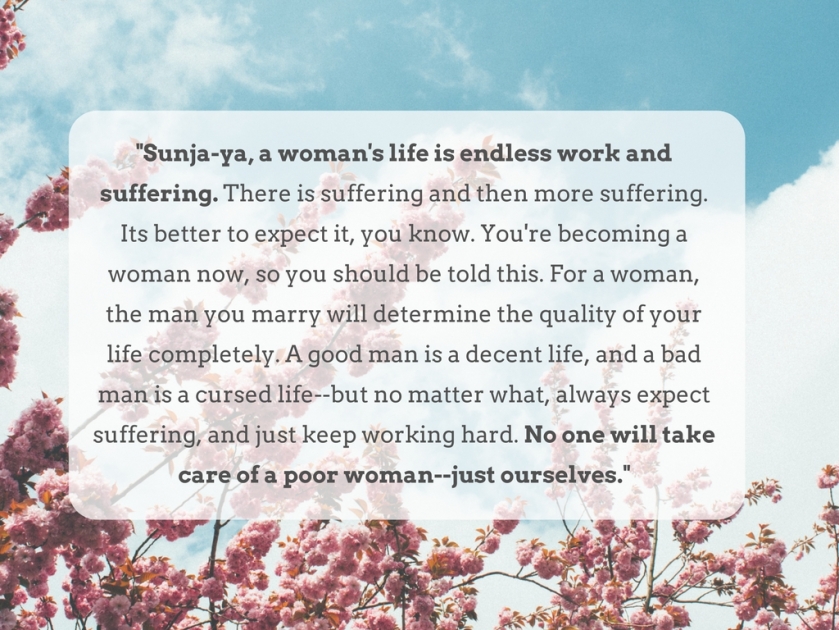 This endless work and suffering is what bookends the story, manifested in different characters. Lee portrays all kinds of women in Pachinko, as she lays out layers of complexities. With each generation, she highlights the struggles of Korean women within their respective socio-economic contexts: women who aren’t allowed to work because of their husband’s beliefs, women who are imprisoned in their marriages because of economic and social reasons, women who are fiercely independent, women who long to come home to Korea, women who long to move to America, broken women, heavy-hearted women, happy women, but always, suffering women.

And as with any colonized country, many resort to fleeing their homelands in search of better opportunities. But what happens when the next place you call home is also your colonizer? Koreans in Japan, such as Sunja’s family and their succeeding generations, bear the brunt of this dilemma. Lee sheds light in the ways many dealt with this — either by assimilating with the Japanese population, or by becoming freedom-fighters themselves. Whatever path they choose is never an easy one.

Sunja’s son Noa, chose the first path. As an exemplary student, he tried to blend in with his Japanese classmates. He kept to himself because he knew his identity was a repulsion, and being Korean in a Japanese school was the playground for a harsh reality.

Sunja’s brother-in-law on the other hand, Yoseb, witnessed two of his brothers die (along with Sunja’s husband) because of their activism. He vowed never to involve himself or the rest of the family in any cause, other than that of their survival. 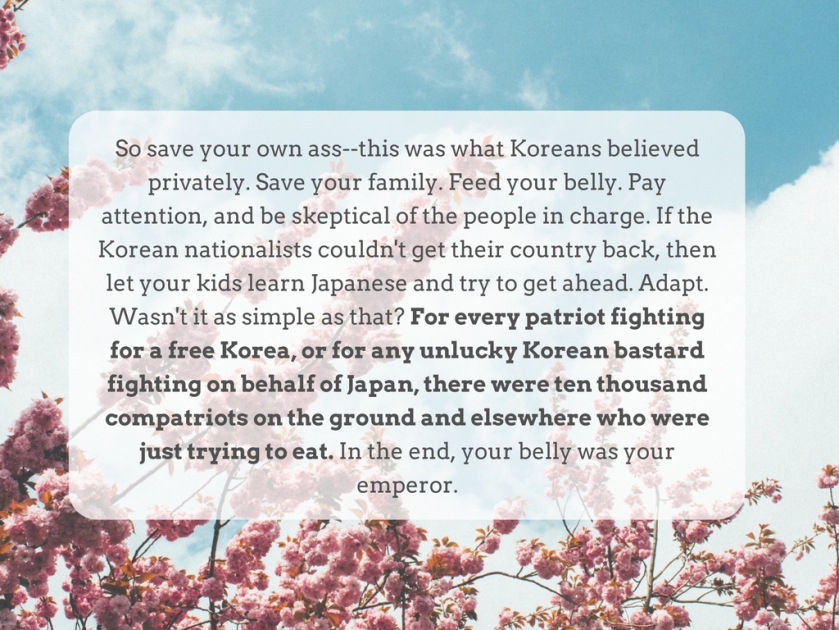 Yoseb reiterated this many, many times, a sentiment born out of fear, of personal loss. It also reflected the kind of hopelessness that belied his conditions, a man traumatized by what he has gone through in life. His reasons are completely valid, but I also wonder what he would think if he knew an entire movement working for a free Korea, and not just in an individual, piece-meal perspective as illustrated by his other brother Isak.

I admit that I am embarrassingly ignorant about Korea’s history, what I do know is that we share a piece of colonial history. Japan was the Philippine’s briefest but worst colonizer, three years filled with blood, murder and rape of Filipino women.

Pachinko is one of the contenders for this year’s National Book Award prize for fiction, and it’s high up on my list with Jesmyn Ward’s Sing, Unburied, Sing. It is an epic saga of a Korean family, an ode to the strength and resilience of women, an homage to Koreans’ struggle for freedom and independence.

One thought on “The Woman’s Lot, with Min Jin Lee (A Book Review of ‘Pachinko’)”