“I was attracted to science fiction because it was so wide open. I was able to do anything and there were no walls to hem you in and there was no human condition that you were stopped from examining.”
—Octavia Butler

I remember reading Octavia Butler’s book once, the first time I’ve ever been drawn to science fiction. It was crossing a realm of spirituality that I never knew could exist in science fiction, because I’ve long dismissed the genre as something that young men only enjoyed. That was an embarrassing mistake.

These days, I seem to gravitate towards certain kinds of literature, always on the lookout for the next best read. After reading Her Body and Other Parties by Carmen Maria Machado, I wanted more. I started reading this book soon after, and ended with the most appropriate title I could have ever picked up — Adrienne Maree Brown’s Emergent Strategy (review coming soon). I was on a feminist science fiction kick, and I didn’t even realize it!

The Power (Indiebound) by Naomi Alderman cements this period for me, as I dove right into a world where men are actually fearful of women. Where young boys are told to be careful while walking by themselves. Where men cry oppression for themselves because in Alderman’s book, women, specially young girls have the upper hand.

And then it becomes apparent: it is only young girls who are gifted with skein, electricity humming and coursing through their bodies. Chaos ensues, as everything gets upended.

Many of Alderman’s main characters are young women, specially those who have risen out of difficulties in their life. Out of anger, out of grief, they were able to summon the power within themselves, which came in the form of jolts of electricity emanating from fingertips.

There’s a girl who calls herself Eve, (called Allie before the power) who listens to a voice she hears in her mind for the next steps, the back and forth conversation which has proved to save her life more than once. After repeated assaults by her guardian, she runs off to a convent and finds herself cared for by nuns, along with other girls who have run away themselves. This is where Eve finds footing to fulfill a prophecy, of being the chosen leader by the Goddess. 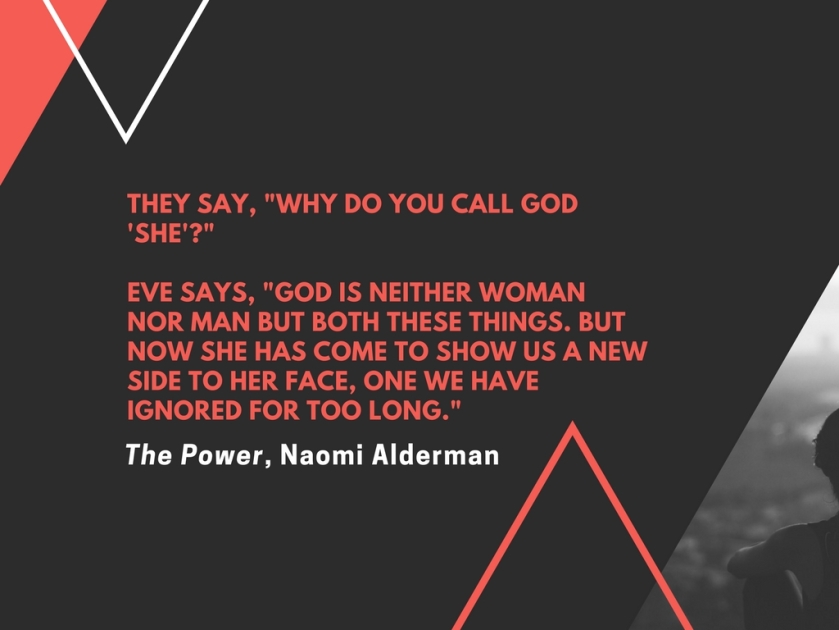 There’s Roxie, a tough girl from London whose mother was brutally murdered until she had to step in not knowing she had the power herself. Vowing to avenge her mother’s death, she is suddenly reunited with her estranged father and brothers engaged in criminal syndicate activities. Just like other girls herself, Roxie feels the power within her, a surge so strong she finds herself seeking other places where is needed.

She finds an ally with Eve, and together they seem unstoppable.

There’s also Margot, whose power she had to keep under wraps since she served as a public official. Because her own daughter suffered from a kind of skein malfunction, her role was to mitigate a response that would not harm young women but which would also keep the state at bay.

And then there’s Tunde, a young Nigerian man who happens to document the first few instances of some girls using the power which catapults him into an overnight celebrity-journalist. He travels the world and gains the trust of many to tell their stories. 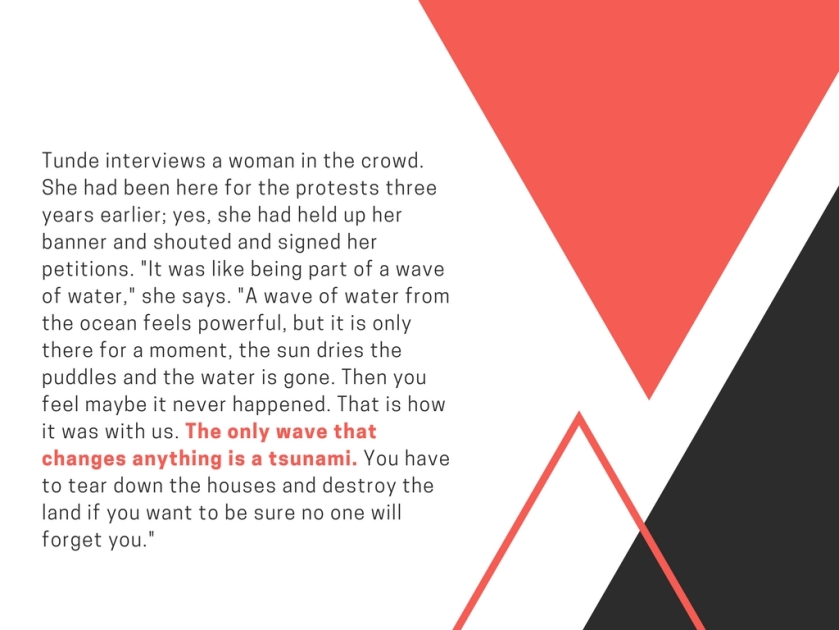 Reading The Power during Trump’s presidency feels necessary. When you have a sitting president who’s been known to commit sexual assaults against women, who has used his wealth and position to bully many people, a world like the one Alderman has created resonates.

At a time when #metoo, a hashtag that started on Twitter which conveys strength and solidarity between sexual assault victims and survivors, Alderman’s work feels urgent. When more and more women are coming to hold their assailants accountable, refusing to be silent no more, the world where Eve and Roxie thrive feels like a dream.

Make no mistake though, as this world is far from a utopian reality. As with any revolution in the history of our world, it is violent, muddled with many complexities. It almost read like a parallel world, complete with illustrations of ancient artifacts.

The correspondence in the beginning and the end though between the writer and another (fictional?) person throws me off, as if the writer was trying to make a point about who gets to record history. It would’ve been a great addition, had it been employed in the same manner Magda Szabó’s The Door was. It was too meta for me.

Overall, the book was an entertaining read, set in a time when women in power is needed. Whether that’s in literature, in the movies or in any other format, we need books that speak of alternate realities more than ever.

2 thoughts on “Who Run the World? Girls! With Naomi Alderman (A Book Review of “The Power”)”