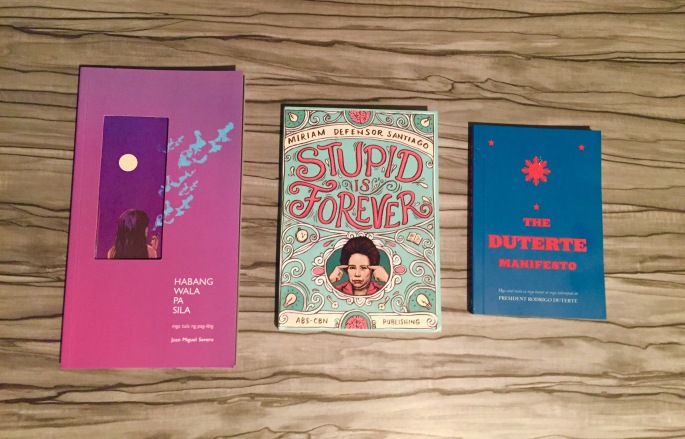 My parents got back from the Philippines last week, after spending two blissful weeks in the homeland. Every time they go for a visit, they always come back electric and full of life. Along with that renewed zest is also a tinge of melancholy, written in their faces as they slowly readjust to life back in the States. I hug both of them and smell the sweet scents of home.

But because homesickness also has a physical element, it wouldn’t be a homecoming for Filipinos without balikbayan boxes. My parents had four of those boxes which contained gifts and goods from the country: dried mangoes, polvoron (plain and chocolate ones), specialty dried herring in mason jars, “French” corned beef, candies from sari-sari stores we used to buy as kids (Mik Mik, Haw Haw, Hi-Ho), lengua de gato (butter oats), 3-in-1 coffee mixes, garlic peanuts, special tamarind candy, delicacies from Baguio (chocolate marshmallows, chocolate flakes) and more.

I think my sisters, our relatives, family friends and I have enough goodies to tide us over until the next wave of homesickness hits. We can always eat our feelings.

While munching on one of the Pan de San Nicolas my dad absolutely adores, my mom handed me another package wrapped in plastic. I think they secretly waited until I ate some of the “heritage cookie” specially made in our province (Pampanga), which bears an embossed image of the St. Nicholas on the biscuit itself. My parents are unhappily aware of my Buddhist beliefs, gravely disappointed by my spiritual choices after having gone to a Catholic school for 14 years. Word has it that it has a “curative effect,” to be eaten while saying a prayer. I felt bad after literally biting the head off one.

I opened the package and in it were three glorious things:

The first two books were from my dear cousin back home, Ate Tet, and the last book was something that caught my dad’s eye. I mentioned that I wanted these two books unavailable in the U.S. and sure enough, my family came through with my request. 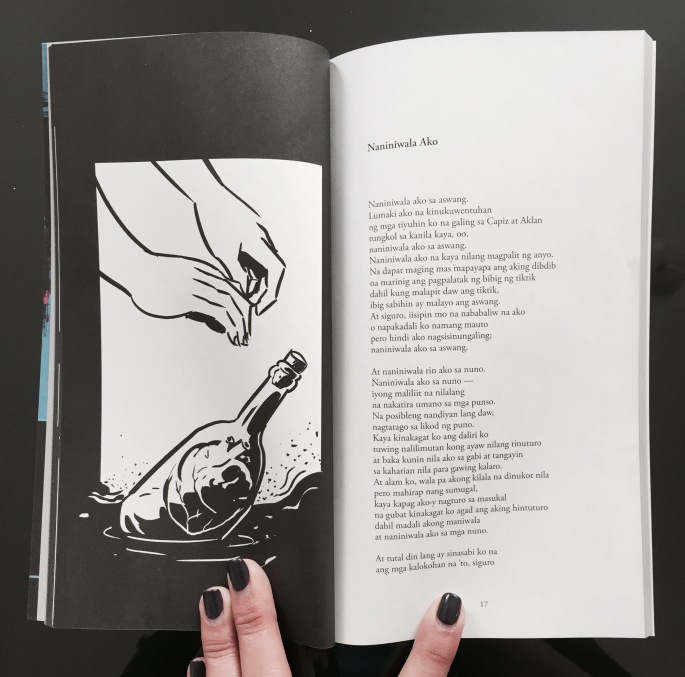 I first heard about the poet after watching a spoken word piece that went viral. I’ve always loved spoken word artists — Kai Davis, Aja Monet, Saul Williams; and I’ve always admired Filipino poets — Bienvenido Lumbera, Joi Barrios, Jose Garcia Villa. It was a breathtaking experience to see both Tagalog and spoken word combined, to witness Severo’s work. The depth of his poems and the conviction of his delivery tugs at the heart. It was like being granted permission to access those parts of us we didn’t even know existed. And to top it all off — I’m an undoubtedly big fan of a Filipino teleserye called “On The Wings of Love” which featured the poet and his work consistently. 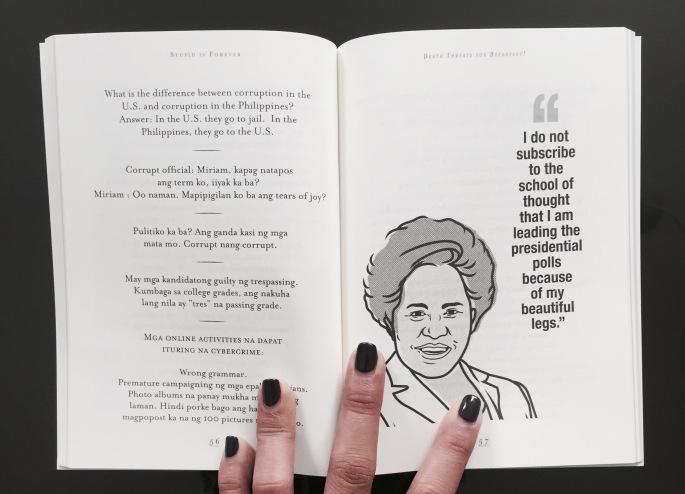 Law school is quite easy. It’s like a stroll in the park. Pero Jurassic Park.

The next book Stupid is Forever by this renowned politician in the country is “a collection of jokes, one-liners, pick-up lines, comebacks and speeches delivered and/or curated by the beloved Senator.” I’ve always looked up to MDS even as a kid, as I watched her on TV deliver impassioned speeches in Congress, in awe of her intellect and outspokenness. She ran for president during the most recent election season in the Philippines and lost, the frailty of her health a huge concern. 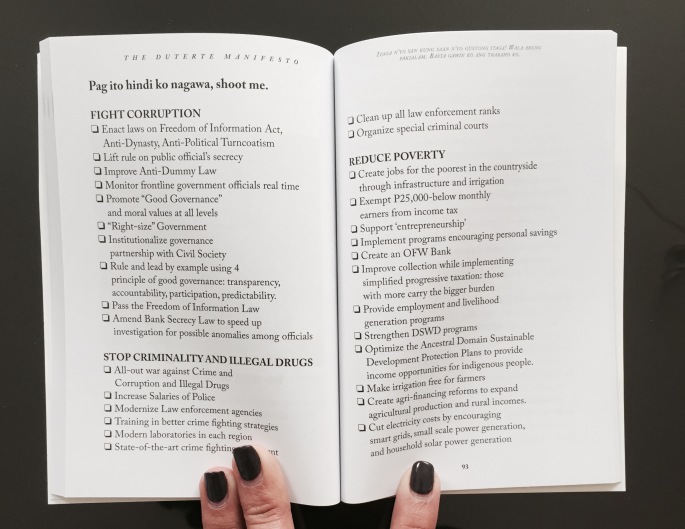 I don’t care if I burn in hell as long as the people I serve will live in paradise.

Last but not the least (and also unexpected) was a copy of The Duterte Manifesto from my dad. My dad likes (or loves) to challenge my political beliefs, specially when it comes to politics in the Philippines. He knew I would find this book interesting, notwithstanding its title very similar to another very popular manifesto out there. Duterte is an interesting figure, rife with contradictions but I’m watching and learning. If anything, this book promises to be an intimate rendering of the president. In the introduction, it was signed (translated from Tagalog):

“From my humble hacienda larger than the terrain/estate of (bleep),”

I can only surmise that Senyora is alluding to Hacienda Luisita, owned by the former President Aquino’s family, a site of decade-long struggle and resistance of the farmers against their landlords.

These three books in no means capture the state of Philippine society as a whole, but they draw a picture of popular culture that is reflective of different parts of Filipino society. I’ve always trusted books more than television, finding poets and writers more credible (even while they’re making jokes!).

I’ll be spending the next few weeks immersed in these three literary pieces of which I will duly be reporting back and writing about in this blog. Now that’s what you call healing.