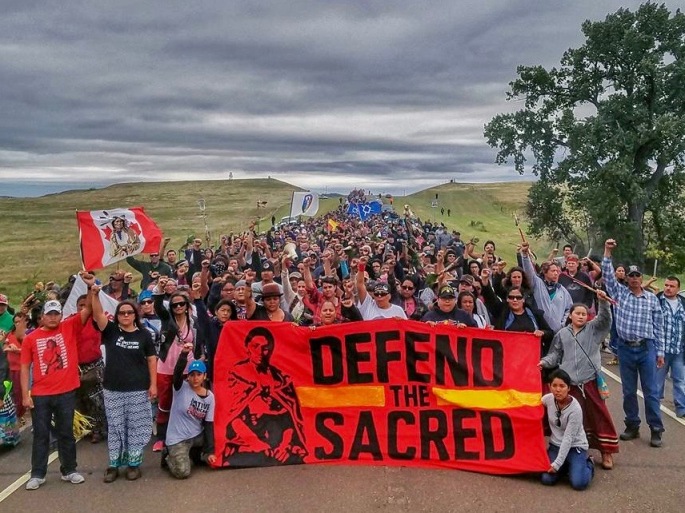 The resistance is stronger and more alive these days — everywhere you look. From the streets of Oakland to the streets of Manila all the way to Camp Oceti Sakowin in North Dakota, people are mobilizing to stand up and resist forms of fascism, capitalism and imperialism.

In the past few months, the struggle of the Standing Rock Sioux tribe against the construction of an oil pipeline in North Dakota has been at the forefront of grassroots resistance. The $3.8 billion Dakota Access pipeline cuts through sacred land, and if completed can potentially poison waterways such as the Missouri River and Lake Oahu, the source of drinking water of the Standing Rock Sioux tribe.

As I write this, the entire country has just celebrated a holiday (Thanksgiving) rooted in the genocide of Native Americans. This day is followed by “Black Friday” also known as hyper-capitalism as throngs of people descend retail stores and malls for discounted goods. The irony is not lost.

There are many ways of supporting the struggle of the Standing Rock Sioux tribe — signing petitions, participating in actions and mobilizations, calling the Army Corp Engineers, emailing the executives of Energy Transfer Partners L.P., donating to the camp — and I think that each one contributes in large and meaningful ways calling for an end to this pipeline.

On Thanksgiving morning at around 5:00 in the morning, I boarded a ferry to Alcatraz, once the home of Native Americans in the Bay Area, to commemorate and mourn the massacre of 700 Pequots killed that day. More than ever, the struggles of Native Americans back then against their colonizers is still evident today.

History repeats itself and if there’s anything that this blog aims contribute to the struggles of Native Americans, it is to foster consciousness among its readers through literature. November is also Native American Heritage Month and I am grateful for blogs like Literary Hub and Read Diverse Books who have compiled books by Native American writers. What’s happening in North Dakota isn’t isolated — it’s backed by centuries of genocide, colonialism and resistance of the Native American people that all of us should know.

Everything You Wanted to Know About Indians But Were Afraid to Ask
(May 1, 2012)
Anton Treuer
(Popular History)

This list is by no means exhaustive, but starting points as the First Nation Development Institute recommends. Check out the Native American Heritage Month book recommendations here, Literary Hub’s list here as well as the list from Read Diverse Books here.