Running a book blog is lots of hard (but pleasurable!) work and one of the things I’m always excited for are end of the year lists, best picks and titles deemed noteworthy usually announced around this time.

I’ve seen a lot of best of the year book lists and here are some of my favorites:

Out of all these lists though, I’m particularly partial to The New York Times best of the year book list, which usually consists of fiction and nonfiction books. Selected by the editors of The New York Times Book Review, it is something I look forward to every year.

So when it was finally released on November 30th, I was thrilled to see all five of their listed fiction books as titles I read and reviewed this year on the blog! Five-starred and highly rated, these books are the kind I hope to read for the rest of my life, stories that move and shake and empathize and challenge. I cried throughout most of them, and I’ve probably listed them on numerous lists prior to this post. They are the kind of stories I love reading and I hope to write in the same vein someday. 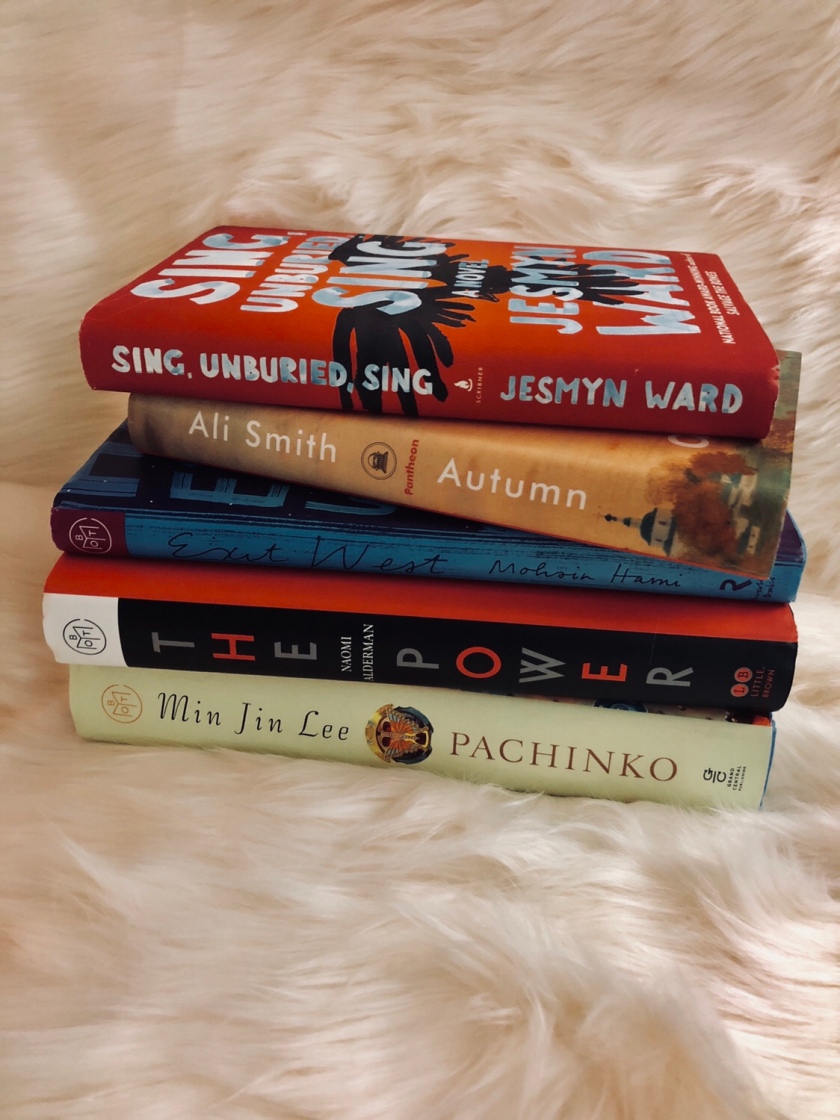 Here are *the great five* of 2017, along with excerpts from my book reviews this year:

Reading Jesmyn Ward’s Sing, Unburied, Sing was like having a deep, deep breath lodged in the cavity of my chest, something I held on to for its entirety. Ward’s newest novel isn’t for the faint of heart either, but for someone who’s strong of will, someone who can understand the gravity of what it means to be healed, and what it means to need healing, specially at a time when the world just feels too heavy. Read the full review here.

The book follows the lives of reluctant lovers (at first), Nadia and Saeed in the process of living, of leaving. Saeed is very much the son of his parents, timid and reserved, while Nadia is out on her own, having left the roof of her parents’ house as soon as she was able to. She dons black robes for protection, as she rides her motorcycle through the city of an unspecified country. It is a love story as much as it is a story of migration and transitions. Instead of focusing on the journey out, what Hamid focused on was how wars move and change people. Read the full review here.

This is a novel set in the UK, not a love story but a story about love in many forms. There’s Elisabeth and her mom, living alongside their neighbor, Mr. Daniel Gluck, and the world around them revolving in varying degrees of discovery and reconciliation. Theirs (the main characters’)  was no ordinary friendship, no feudal relationship. They talked about arts, books, ways of looking at the world. The ever-present question, always Gluck’s greeting to the young one was: What you reading? Read the full review here.

This endless work and suffering is what bookends the story, manifested in different characters. Lee portrays all kinds of women in Pachinko, as she lays out layers of complexities. With each generation, she highlights the struggles of Korean women within their respective socio-economic contexts: women who aren’t allowed to work because of their husband’s beliefs, women who are imprisoned in their marriages because of economic and social reasons, women who are fiercely independent, women who long to come home to Korea, women who long to move to America, broken women, heavy-hearted women, happy women, but always, suffering women. Read the full review here.

The Power by Naomi Alderman

This book is something I dove right into where men are actually fearful of women. Where young boys are told to be careful while walking by themselves. Where men cry oppression for themselves because in Alderman’s book, women, specially young girls have the upper hand. Many of Alderman’s main characters are young women, specially those who have risen out of difficulties in their life. Out of anger, out of grief, they were able to summon the power within themselves, which came in the form of jolts of electricity emanating from fingertips. Read the full review here.

Have you read any of these books? Share your thoughts in the comments below! 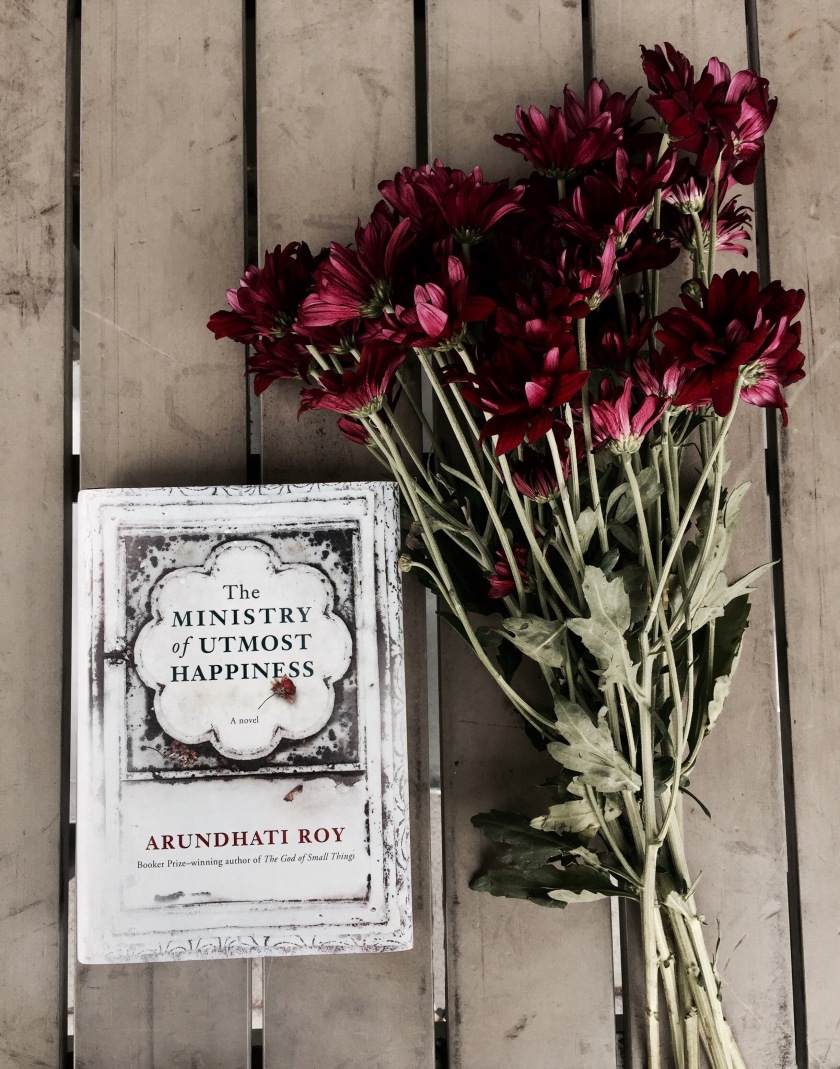 I published my book review for Arundhati Roy’s The Ministry of Utmost Happiness earlier this week and if you haven’t checked it out, head on over here. It’s one of those books that you fully appreciate days after reading it, with the big picture getting clearer as days go by. It is a love letter too, an ode to hijras, mothers, freedom fighters, to Kashmir. The world will thank you for reading Roy’s newest book, so you best get on it.

I have been working on it for roughly 10 years. That was when I started putting down things which are in this book right now.

—An Interview with Arundhati Roy (The Slate Book Review)

She knows everything from the frighteningly euphemistic military terminology of the region (informers are “cats” and so on) to the natural landscape of “herons, cormorants, plovers, lapwings,” and the “walnut groves, the saffron fields, the apple, almond and cherry orchards.” She looks into homes, into bomb sites, into graveyards, into torture centers, into the “glassy, inscrutable” lakes. And she reveals for us the shattered psychology of Kashmiris who have been fighting the Indian Army and also occasionally collaborating with it.

Much of what Roy wrote in the book about the Kashmiris’ struggle for independence and self-determination reminded me of the lumad people. The lumad are the indigenous communities in the southern part of the Philippines, which has been under martial law for about two months now.

If you’re in the Bay Area next week or know of friends in the area, join me at the opening of an exhibit of artwork by Filipino political prisoners to raise funds for victims of martial law in the country. 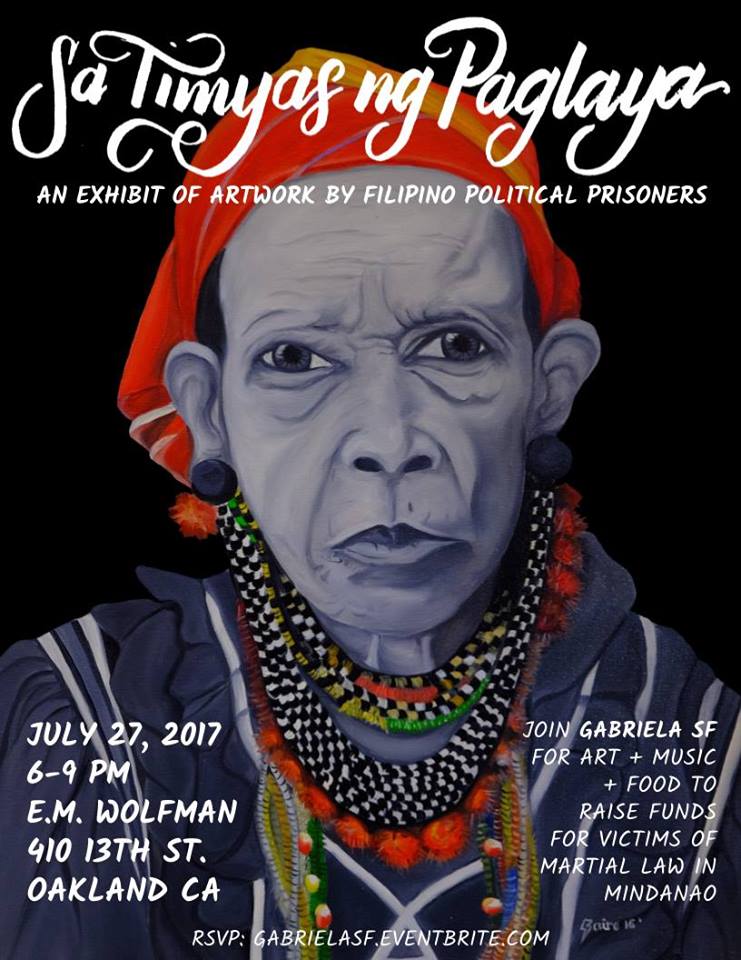 The woman in the flyer above is none other than lumad leader, the fierce Bai Bibiyaon Bigkayan Likay. For more on women lumad leaders, check out this post I wrote about them.

When the external world is teeming with bullsh*t and horrendous stuff (read: MAGAnomics, Trumpism), I usually find solace by going within.

This week marked the return of one of Deepak Chopra and Oprah’s 21-day meditation experience, and I’ve been all over it. The theme for the next 21 days is Desire & Destiny and after only a week of doing it I’m noticing the way I respond to things, and how I’m more receptive to the world around me.

Today’s mantra was Om Bhavam Namah (I am absolute existence. I am a field of all positbility) — it’s not too late to sign up!

And since we’re talking about internal worlds, here’s one from the archives: The Art of Stillness by Pico Iyer.

I think that everything important in my life has not come through my mind, but through my spirit or my being or my heart. Everything I trust, whether it’s the people I love or the values I cherish or the places that have moved me, have come at some much deeper level than the mind. And I sometimes think the mind makes lots of complications over what is a much more beautiful and transparent encounter with the world.

And it’s true, most of the releases I had the chance to read this year blew my mind. The New York Times came out with their best books of 2016, two of which I reviewed on the blog. Buzzfeed also came out with their own list, similar to what has been featured in the NYT and on this blog.

Coming up with only five books was hard, but there were a number of considerations. I like to think of Libromance as a living and breathing part of the world, wherein books featured reflect the struggles of our time. Whether these are external factors — political nightmares, increasing state violence, etc. — or internal factors — the need for security, means for survival, our capacity to love — the decision to narrow it down to just five was a meaningful and intentional process.

…the story of Cora, a slave who ran away from a plantation in Georgia through a real-life railroad built underground. She used the railroad three times: one heading towards the Carolinas, the second towards Tennessee and then Indiana. Historically, the “underground railroad” was a network of secret routes and safe houses, established by abolitionists and free slaves to aid black folks to get to free states.

…I usually try to finish a book in a week or two but I stayed with Teju’s new book for about a month, as I processed each essay and its significance differently, in the context of a queer Filipino immigrant experience in the United States.

…the love stories we see and hear about are really only the beginning of those relationships, Alain de Botton argues, in his new book The Course of Love. What happens after the proposal, followed by the wedding, are the lives of two people bound not by romance alone but by the humbling reality of living with another person.

…reading Yaa Gyasi’s Homegoing at the time of Alton Sterling and Philando Castile’s deaths was surreal, as if I was looking at the lives of these two black men from a generational perspective, with Gyasi’s historical fiction lens.

…writing about war is never an easy task, it involves remembering what must not be forgotten, slowly treading a path in one’s memory that is never neutral. It is filled with opposing forces — of heroes and villains, of the noble and the wretched, of the conqueror and the conquered. But it must be done. This, I believe, was Viet Thanh Nguyen’s task with his Pulitzer Prize winning novel, The Sympathizer.

These books shook, carried, woke me in infinite ways, beyond my own experiences as a queer Pinay immigrant. There were many that didn’t make the list and you can always check those out here. Have you read any of these books? Let me know in the comments below!